Born out of a need to retain a hospital in New Ross for the people of the town and district, New Ross Community Hospital was established by the local community following the closure of the District Hospital by the South Eastern Health Board in 1987.

Operating since 1989, the hospital is a testament to the volunteerism of the local community, past and present; “For the Community – By the Community.”  It continues to flourish and evolve.  The hospital is run by a voluntary Board of Directors; Deirdre Caulfield, Bob Doyle, Seamus Kennedy, John O’Shea, Frances Ryan, and Dr. Mark Walsh.  The Director of Nursing Josepha Gladney, is responsible for the day to day running of the hospital.  The hospital relies on contributions from the Health Service Executive, private donations and the minimal resident fees. 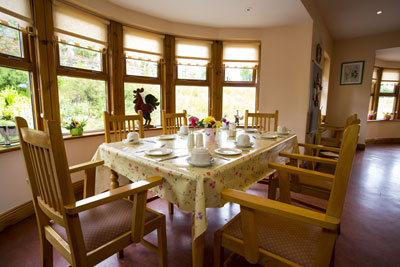 The origins of a Community Hospital in New Ross arose from the closure of the District Hospital, which was at the time under the directorship of the then South Eastern Health Board.   The governing Health Board made the unfavourable decision to close the hospital in the summer 1987, which spurred five local Town Councillors to rally together to retain a hospital for the people of New Ross.

The Closure of the District Hospital was to be the second major blow to the town; already a previous hospital had been closed in town.   Cllrs. Tom Clarkin, Paddy Doyle (RIP), Jim Dwyer (R.I.P.), Frances Ryan and Jim Wash relentlessly campaigned for the local community to retain their District Hospital.

As well as staging a protest outside the hospital to highlight their anger, several deputations were made to the Health Board Offices in Kilkenny.   The small group of only five Councillors lobbied all Public Representatives, Health Board Members and gathered people in the town together to join in the campaign for the retention of a hospital.

Among those to come on board were the late Dr. Charlie Kehoe and former Councillor Julia O’Brien, Accountant Jim Sutton, Fr. John French and Eileen Flynn. All members of the South Eastern Heath Board were lobbied, albeit unsuccessful, to keep the hospital open.

And so the District Hospital was closed and another campaign was mounted and many more people were canvassed to take over the hospital, including all County Wexford members of the Health Board, who were approached to lease the hospital to the voluntary committee. A finance group was subsequently formed under the leadership of Frances Ryan assisted by Teckla Ryan, Eamonn Moloughney, Peggy Hussey and Dr. Martin Burke.

Local generosity prevailed with shops donating supplies, all the medical professionals in New Ross came on board and assurances were given that a spiritual director would always be on board.   With a building, backed by an entirely voluntary group and assurances of support, the next step was to appoint an Administrator and run New Ross Community Hospital.   Initial finance for the hospital was provided by the general public and a contribution from the Department of Health.  Health Service Executive, resident fees, private donations and occasional grant aid from the Department of Health & Children. The hospital was run entirely the Board of Directors on a voluntary basis.   Doctors gave a promise of 24-hour service and one member of the medical profession was also a Board Director selected by their colleagues to serve on a rotational basis.

From there the hospital continued to grow and the first major project got underway with the construction of the hospital’s Day Room.  Residents were able to relax in a beautiful apportioned room with natural light where they could meet with their family and friends, view television, play board and card games or be entertained by many individuals or groups from the community.  New Ross Lions Club made a substantial contribution and others followed suit and so the new room was opened by the then Minister of Finance, Mr. Brian Cowen, T.D. who presented a much welcomed windfall of £60,000 the day he arrived at the official opening.

The second major project to get underway was the construction of a Dining Room, which adjoined the Day Room. This facilitated residents enjoying their meals in a relaxed atmosphere away from the confines of their rooms or wards.

In 2012 ceiling hoists were placed throughout the hospital to the cost of €250,000; once again fundraising played a significant role in facilitating this project.

In January 2016 a major development project took place to comply with the Health Information & Quality Authority’s (HIQA) regulatory requirements.   The two nine bedded wards were converted to three two bedded rooms on each side of the hospital, the four bedded room was converted to a two bedded and single room and an extension was built of eight single en suite rooms. The project cost €1. 3million.  In 2018 another project began, a mechanical and electrical upgrade this cost €450,000.  These projects have greatly enhanced facilities for the residents of NRCH.

The hospital does not receive funding from the Government, it is a registered charity and is run by a Voluntary Board of Directors.  Any money made by the hospital is put back into enhancing the facilities for the residents.

The hospital caters for 35 residents.

For details about services that we provide, our philosophy of care, and much more, please see our NRCH Booklet in PDF format.

We rely heavily on donations. If you would like to make a donation you can do so here, via PayPal. Thank you!

NOTE: These settings will only apply to the browser and device you are currently using.